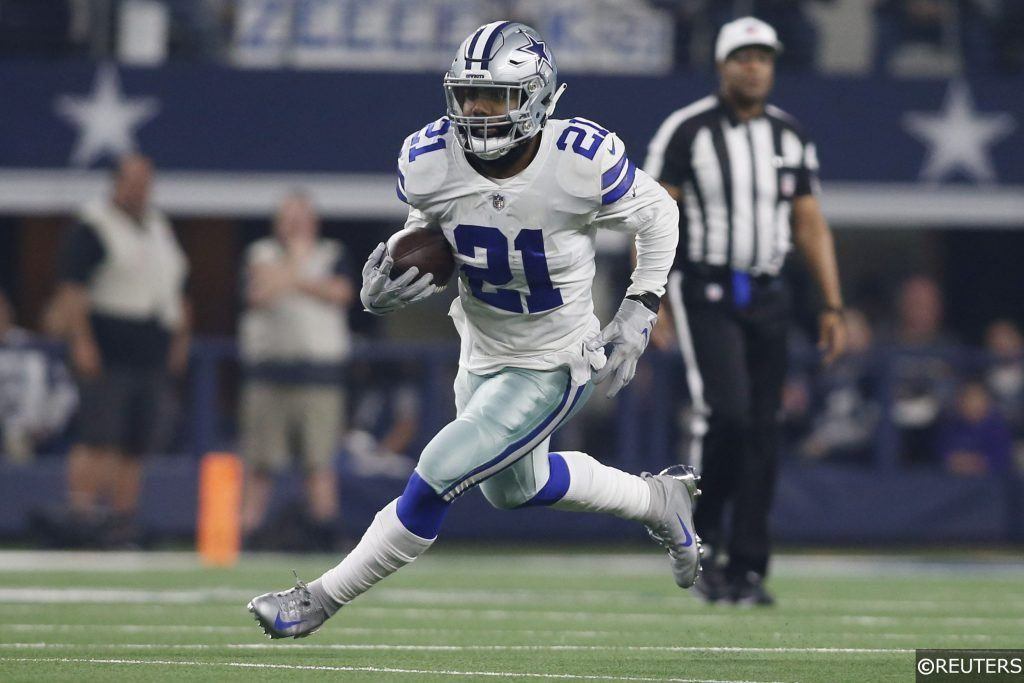 And, we’re off. After the long, arduos offseason, Week 1 of the NFL campaign is just around the corner. With sportsbooks dropping player prop lines for the opener, I’m looking to pounce early. Before I get to my play of the game, make sure you check out our experts picks for game sides and totals, as we’ll be updating this space regularly.

The first game of the regular season features the reigning Super Bowl champion, Tampa Bay Buccaneers, facing off the against the reigning Hard Knocks participants, Dallas Cowboys. Offense is sure to be flowing, in what should be a fast paced game, right off the jump. With that, I’m looking squarely at one of the Cowboys best weapons to re-assert himself in one specific part of Dallas’ gameplan.

Line available at time of publishing. Playable to over 19.5 receiving yards.

Week 1 can be tricky for player props – we don’t have data on the season, and we sometimes have to rely on coach-speak for schematic adjustments that might have been implemented in practice. I personally like to go with what I know. This begs the question… what exactly do I know?

From the Cowboys perspective, they come into the season with very little pre-season contuity on offense. Quarterback Dak Prescott did not play in the preseason while dealing with a shoulder injury.  Reports are that he’ll be a full go for week 1 (somewhat corrobated by Dallas not signing a veteran backup). Receiver Amari Cooper was eased back into camp coming off his offseason ankle surgery, and budding superstar CeeDee Lamb dealt with his own COVID case. With Zeke being fully healthy, and seemingly in terrific shape, the gameplan is likely to center around him.

However, he’ll be greeted by the league’s best rush defense from a year ago. With their “if it ain’t broke, don’t fix it” mantra, Tampa Bay is returning all 22 starters from both sides of the ball this season. As it’s unlikely they’ll be shifting their defensive philosophy, we can lean on the fact that the Bucs allowed the 9th most receiving yards to running backs last season, on the second most targets and second most receptions. The Bucs permitted a running back to hit at least 20 receiving yards in 10 of their 16 regular season games in 2020.

As I mentioned already, Prescott is coming off a shoulder injury. With the Cowboys offensive line not slated as the strength it once was, it’s in the Dallas’ best interest to get the ball out of their quarterback’s hands quickly.  Plus, it’s not like this line represents increased production. In the 61 games Dak and Zeke have played together, the running back has averaged 29.1 receiving yards. In the five games they played together last season under new coach Mike McCarthy, Elliott notched more than 34 yards per game through the air. Back-up running back Tony Pollard will get some run, but make no mistake, Zeke is a crucial piece of the passing attack.

Four targets is the magic number here, with Elliott averaging 6.73 yards per target with Dak in his career. Even if you bring that down to the 5.4 yards per target the Bucs allowed to opposing running backs last season, we still get to the promised land of 20 yards on just 4 looks. I have the Ohio State product projected at 5 targets, and 28 yards in this one.

The post Best player prop for Cowboys vs. Buccaneers: Feed the Zeke appeared first on Pickswise.