The 2021 NFL preseason schedule begins this week but there have already been plenty of changes in the Super Bowl LVI betting since the odds for next February’s big game were first posted.

DraftKings Sportsbook first released odds for the 2021-22 campaign before last season’s AFC and NFC Championship games with Kansas City as +600 favorites, and the Chiefs are still at the top of the market despite their Super Bowl loss to Tampa Bay. In fact, the odds of Andy Reid’s team winning for the second time in three seasons are now even shorter at +500 with both DraftKings and FanDuel Sportsbook.

But behind them there has been plenty of movement. Green Bay was second favorite at +800 in the opening show, before its NFC Championship loss to the Buccaneers, but the Packers are now out to +1300 even though Aaron Rodgers is set to return for at least one more season.

Let’s take a look at some of the teams whose odds have made the most significant moves since the opening show.

Don’t forget, you can read all our NFL futures articles under our NFL news tab. It includes our bets on teams to either make or miss in the playoffs in both the AFC and NFC as well as our best bets on some of the early game lines posted for Week 1 through Week 17.

And you can read our full preview of the preseason-opening Hall of Fame Game here.

The Buccaneers were still to convince everyone after their early playoff wins over Washington and New Orleans, but going on to defeat Green Bay and making Kansas City look human after all in the Super Bowl earned them plenty of market respect. Even after that, the thinking was that Tom Brady might retire (nope) or the Chiefs would lose several of their key players in free agency (nope again, they’re pretty much all back and arguably even stronger). Plus Brady knows Bruce Arians’ playbook much better and has had knee surgery, so should be at full strength. The result? The Bucs’ odds are half what they were initially.

This is an interesting one because oddsmakers and bettors are placing a lot of faith in new quarterback Matthew Stafford, acquired from the Lions, bringing them more success than Jared Goff, who, let’s not forget, was also a first overall draft pick and at least good enough to lead them to a Super Bowl three years ago. What they might not be considering enough is that the impressive Rams defense has lost some key elements, with star safety John Johnson and cornerback Troy Hill leaving in free agency — that’s 40% of one of the best secondaries in the league. Don’t forget that defensive coordinator Brandon Staley also left to become head coach of the Chargers. And running back Cam Akers is already ruled out for the season. Still, if Stafford does prove the major upgrade Sean McVay hopes for, they should still be in the mix.

The Browns had just departed the 2020 playoffs with a loss at the Chiefs in the divisional round when the first odds were issued, but they are shorter still now after a much-needed defensive overhaul. In addition to signing the two Rams mentioned above to bolster their secondary, they drafted Greg Newsome in the first round, get Greedy Williams and Grant Delpit back from injury, added run-stuffer Andrew Billings who opted out last season, and bolstered their linebackers with Anthony Walker Jr. from the Colts and rookie Jeremiah Owusu-Koramoah. Then they gave Myles Garrett a new running mate off the edge in Jadeveon Clowney. With their offense almost entirely intact from last season, the Browns are being taken seriously.

This one is a bit of a puzzle as most of the shrinkage of the Broncos’ odds seemed to be due to the possibility of them acquiring Aaron Rodgers, which isn’t happening now. Look behind the headline, though, and you can see what might have attracted the Green Bay passer. The Broncos are stacked on offense with Courtland Sutton, Jerry Jeudy, K.J. Hamler, and Noah Fant, and drafted the promising RB Javonte Williams to compete with Melvin Gordon. Their defense could be one of the best around, so if Drew Lock figures it out or Teddy Bridgewater excels, watch out.

The WFT impressed a lot of people in the playoffs last season, and their defense looks one to reckon with. They added weapons with Curtis Samuel and rookie Dyami Brown, but much depends on how often veteran QB Ryan Fitzpatrick shows the FitzMagic side of his game. 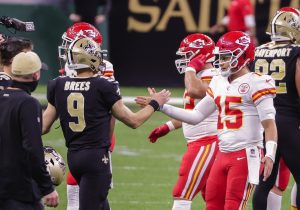 This move is easy enough to figure out. Drew Brees retired. The Saints haven’t made any blockbuster moves at QB in free agency or the draft, so it’s down to Jameis Winston or gadget guy Taysom Hill to lead the offense.

It’s weird to see the Patriots among the favorites for the Super Bowl and it’s even more unusual to see their odds getting bigger. But bettors taking the early price on the Pats might have hoped for something better than them getting the fifth first-round QB in Mac Jones and heading into the new season with Cam Newton still likely to start. The Pats were busy in free agency, bringing in Nelson Agholor, Kendrick Bourne and high-price tight ends Jonnu Smith and Hunter Henry, but with the Bills and Dolphins looking strong in the AFC East, it’s understandable that Bill Belichick’s team is not a popular pick this season.

Injuries come in groups in Indy, with new QB Carson Wentz’s foot injury soon followed by a near-identical issue for Quenton Nelson, one of the best guards in the league.

This is the other side of the Rams trade. Jared Goff lands here in place of Matt Stafford and new coach Dan Campbell needs to show he is about football as well as entertaining press conferences.

Name your own price for the Texans to win the Super Bowl this season and your sportsbook will probably still take the bet. The Texans seem unlikely to have star QB Deshaun Watson on the field for one reason or another (current injury, possible suspension, and he doesn’t want to play for the team, are the top three) and first-time head coach David Culley, at 65, has an unenviable job on his hands.

Our expert breaks down the 5 biggest stories entering the 2021 NFL season, and how they shape the betting market