The AFC South proved to be a division of two halves in 2020 and it’s hard to see the gulf between the section’s haves and have-nots disappearing this season. Tennessee beat Indianapolis for the title with a tiebreaker after both teams posted 11-5 records but there was a seven-win gap back to Houston in third and Jacksonville, who won only one game and landed the first pick in the draft.

Sportsbooks and fans alike expect the Jaguars to overtake the embattled Texans with Trevor Lawrence now installed as potential franchise savior, but new head coach Urban Meyer looks to have a bigger job on his hands to turn things around in Florida than many initially thought.

That leaves it looking like a straight race between the Titans and Colts again, and while Indianapolis has had a troubled offseason, a strong defense and a talented coaching staff should keep them in the hunt.

If you’re looking for more in-depth analysis and futures picks ahead of the 2021 NFL season, be sure to check out our predictions for who wins Super Bowl 56, as well as our assessment of which three teams will improve dramatically this year, and which teams will regress. As for individuals, we have also taken a look at the main player markets—including MVP and Offensive Rookie of the Year.

You can also find other division previews:

For now, let’s break down the race to win the AFC South.

Franchise cornerstone JJ Watt is gone, quarterback Deshaun Watson’s status remains up in the air, and it looks like things might get worse still for Houston before they get any better. The Texans at least won four games in 2020, a total that did not do justice to the talent available, but the talent could be severely lacking this year. Journeyman Tyrod Taylor, a real trier but hardly an elite passer, looks set to start the season at QB, there’s a mish-mash of veterans at running back (Phillip Lindsay, Mark Ingram and David Johnson), and very little to get excited about on the defensive side of the ball. Rookie head coach David Culley will be 66 on September 17, but he’s in good company with much of the team roster featuring has-beens and castoffs. Last place in the division beckons.

It took a good team to beat the Colts last season – the problem was, they didn’t beat enough good teams. After inexplicably giving Jacksonville their only win of the year on the opening day, all the Colts’ defeats came against playoff teams — the Browns, Ravens, Titans, Steelers and, in the playoffs, the Bills. What you can take from that is that Frank Reich’s squad look to have what they need to return to the playoffs, with a strong defense led by linebacker Darius Leonard and bolstered by rookie pass-rusher Kwity Paye. But that they might again struggle to beat elite teams if and when they qualify. New quarterback Carson Wentz has to prove himself again after losing his early spark in Philadelphia but if he finds his form after a preseason foot injury the Colts should be a solid unit once again.

Check out our full preview of the AFC North division here!

A magical turnaround in Jacksonville under college football coaching legend Urban Meyer doesn’t quite appear to be in the cards, at least not this season. Meyer has made some bad decisions — Tim Tebow at tight end and giving Gardner Minshew training camp reps Lawrence could have had, only to trade him for a bag of footballs, for example. And he’s also had some bad luck — first-round running back Travis Etienne will miss his rookie season. Reports that players aren’t enjoying his overbearing coaching style are a worry, too. So mark the Jaguars down for a season of quiet progress at best, and a nasty implosion at worst. Either way, they shouldn’t be troubling the top half of the divisional standings. 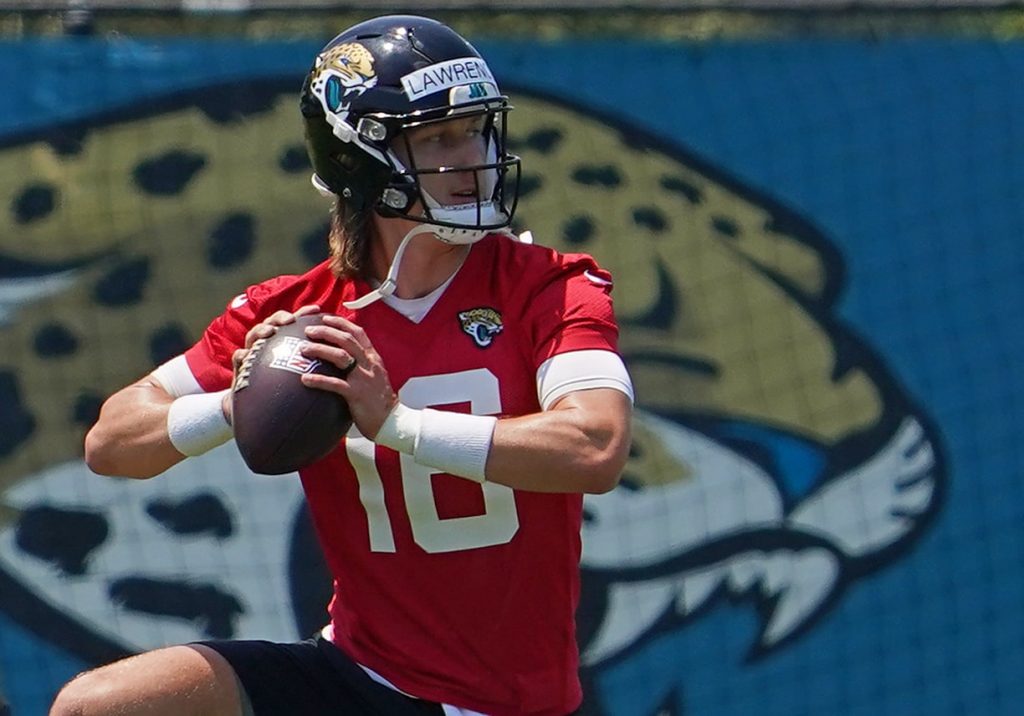 The Titans have been something of a buzz team in the offseason, with the capture of elite wide receiver Julio Jones a highlight of the free agency season, but the excitement of that signing making them over the top as Super Bowl contenders ignores both the strength of the rest of the AFC outside this division and the losses they incurred previously. QB Ryan Tannehill led a smooth passing game, but two of his top pass-catchers, WR Corey Davis and TE Jonnu Smith, have departed, along with offensive coordinator Arthur Smith, now head coach at Atlanta. Running back Derrick Henry should continue to torment defenses but the Titans need their own defensive upgrades, led by Bud Dupree, to be successful after they ranked 2nd in yards gained but 28th in yards conceded last season.

Wentz’s preseason injury looked to have gone close to handing the division to the Titans, but now he’s back in action, the Colts look a value alternative to the AFC South favorites. Tennessee allowed half of their regular-season rivals to post 30+ points last year and they need rookie cornerback Caleb Farley to hit the ground running.

The Colts are well-coached and have a superior defense to the Titans. Wentz doesn’t have to be back to his best for them to win, but he does have to be a lot better than the worst we saw from him in Philadelphia, where he lost the starting QB job just two seasons after being voted the third-best player in the NFL in 2018.

With Houston and Jacksonville showing no sign of being contenders this season — the Texans managed to be a disaster area even with Deshaun Watson at QB — this looks a two-horse race and the Colts may just offer the better value with more question marks over Tennessee than the odds suggest.