The return of a full slate of NFL preseason games was a wonderful sight over the weekend and the good news is we’ve got another one to enjoy this week.

The early lines are out for the preseason Week 2 games and remember — this warm-up campaign in unlike the ones we were used to before the exhibition games were canceled entirely last year due to the pandemic.

The old pattern of a four-week campaign used to be that starters would play for maybe one drive in game 1 and a quarter in game 2, with game 3 being the full dress rehearsal with starters featuring for a half or even more if the coach wasn’t satisfied at that stage, and game 4 being the last chance to shine or more likely a farewell appearance for those about to hit the waiver wire the next morning.

With only three games this year — and importantly a week off between the final preseason game and the start of the regular season, it’s likely that there will be a gradual increase in the strength of competition with the final game being the most meaningful contest.

Lessons from Week 1 of preseason

If anyone was unsure how a teams’ overall strength relates to early preseason results (or rather, doesn’t), scores such as Houston beating Green Bay 26-7 and Tampa Bay falling to Cincinnati 19-14 should be a useful reminder. It’s safe to say they would not be the results if the teams met in the regular season.

Bear in mind that the novel schedule led to head coaches taking some widely differing approaches to personnel usage in Week 1, with Washington holding out only 6 while the Rams were not willing to risk 38 of their players.

For more insight, check out our article on 3 things we learned from preseason Week 1

Five straight game days. Sounds good, right? Yes, Week 2 kicks off with New England at Philadelphia on Thursday (for some reason that matchup still reminds me more of the Brady vs McNabb Super Bowl rather than the Philly Special one). Then we’ve got 2 Friday games, a 10-game Saturday feast, 2 on Sunday, and Jaguars vs Saints to finish off on Monday. Let’s look at the early lines, courtesy of FanDuel Sportsbook:

Saturday
Bills +2 at Bears
Jets +2.5 at Packers
Falcons +3 at Dolphins
Ravens -3 at Panthers
Lions +5.5 at Steelers
Titans +3 at Buccaneers
Texans +3 at Cowboys
Colts -1 at Vikings
Broncos -2.5 at Seahawks
Raiders -3 at Rams 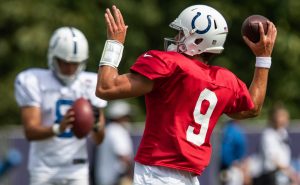 The first thing you’ll notice is that, as ever, preseason lines are tight, with most games seeing the teams separated by a field goal or less, given that so much depends on how competitive each team decides they want to be.

The Steelers are the week’s biggest favorites, which makes sense, seeing as they are both battle-hardened, with two games already under their belts, and they have gone 2-0, showing their backups can get the job done. They are 5.5-point favorites against the Lions, who lost by only one point to Buffalo in their opener.

The Browns are the next biggest favorites at -4 as they will take on the Giants after scrimmaging with them twice this week. The big storyline here would be Odell Beckham Jr. facing his old team, but it’s highly unlikely the Browns will risk OBJ at all in preseason action after his ACL injury, even though he has been looking impressive in limited camp action. Even so, Cleveland’s bubble players were much stronger than Jacksonville in Trevor Lawrence’s NFL debut despite holding out 29 players.

The battling Colts backup QBs should get a chance to shine against a Minnesota defense that allowed a week-high 33 points to the Broncos, while the all-California matchup between the Raiders and Rams should be an entertaining end to Saturday’s show, although Rams coach Sean McVay has said we will “never” see new QB Matthew Stafford appear in a preseason game for his team.

Don’t forget to check back with Pickswise through the week as our predictions for the side and total on every game appear on our NFL picks page.