Sunday marks the first full afternoon and evening of 2021 NFL regular-season action. One of the most intriguing matchup of the day pits the Seattle Seahawks against the Indianapolis Colts. Let’s take a look at the best same game parlay option for Seahawks-Colts, and also be sure to check out our full game preview for picks on the side and total.

Tyler Lockett to score a touchdown (+110)

Part of the value in same game parlays, of course, is that all of its components can be correlated if you so choose. That is the entire plan here, as Russell Wilson, DK Metcalf, and Tyler Lockett all being productive would obviously work well with a Seattle win. Let’s break down each of the 4 legs one by one.

There is another new quarterback in Indy, as Andrew Luck’s retirement led to the eventual signing of Philip Rivers and now Rivers’ retirement led to the Colts signing Carson Wentz. It looks like Wentz will be ready to go from an injury standpoint, even though he did not play in the preseason and has practiced sparingly because of a foot issue. As such this will Wentz’s first game action since last year with Philadelphia, when he threw only one more touchdown than interception (16 to 15). You have to think Indianapolis will feature the ground game led by running back Jonathan Taylor, but Seattle boasted the No. 5 rushing defense in the league in 2020. If not amazing, the Seahawks are quite clearly a good team—and the Colts did not defeat many of those in 2020. Indy beat up on lower-level competition mostly in the AFC South, while its losses included defeats to the Browns, Ravens, Titans, Steelers, and Bills.

Wilson may not be overly enthused about things in Seattle, but he won’t let that impact his play on the field. The guy is as much of a winner as there is at quarterback…other than Tom Brady. Indianapolis featured the second-ranked rushing defense in the league last season but the same unit allowed almost 260 passing yards per contest—in the bottom half of the NFL in that department. Wilson is coming off a 2020 campaign in which he threw more than 4,200 yards and he will have to air it out a lot this week since running the ball may be tough to come by.

Metcalf reached the double-digit mark in touchdowns last year. He also caught 83 balls in total for 1,303 yards. It is true that Seattle could win a relatively low-scoring affair on Sunday, but all of these player props correlate nicely with any kind of outright victory. If the ‘Hawks prevail, there is a pretty good chance—very good, in fact—that Metcalf finds the endzone. 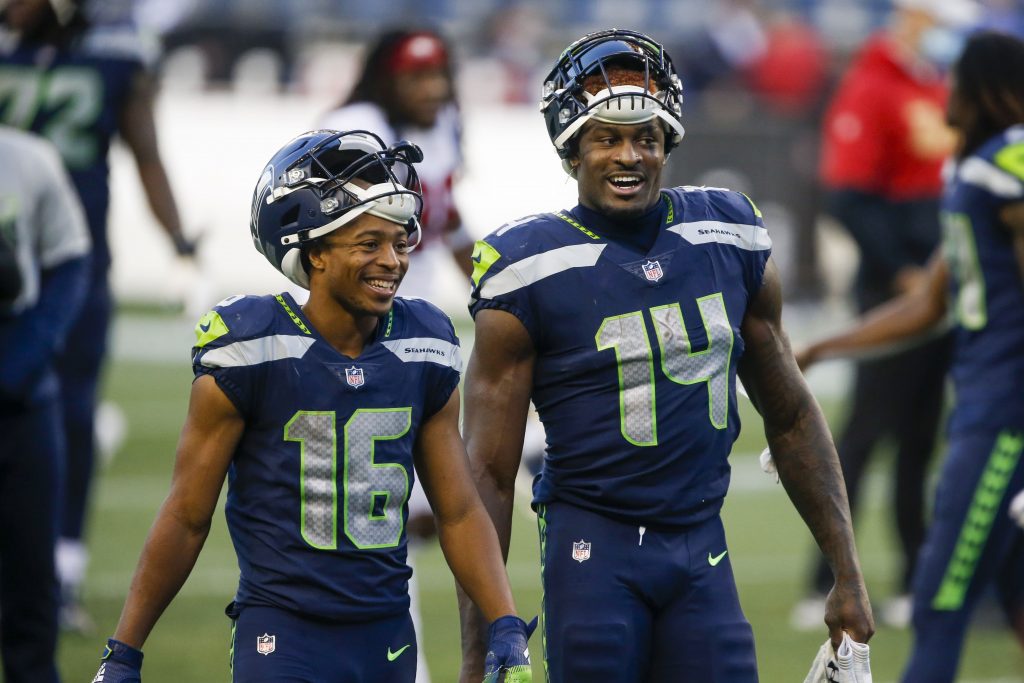 Tyler Lockett to score a touchdown (+110)

The case is the same for Lockett, who was Wilson’s favorite target in 2020. Lockett finished with 100 receptions, which he turned into 1,054 yards and 10 TDs. There is no reason why both stud receivers can’t deliver at least one touchdown apiece at the Colts’ expense.