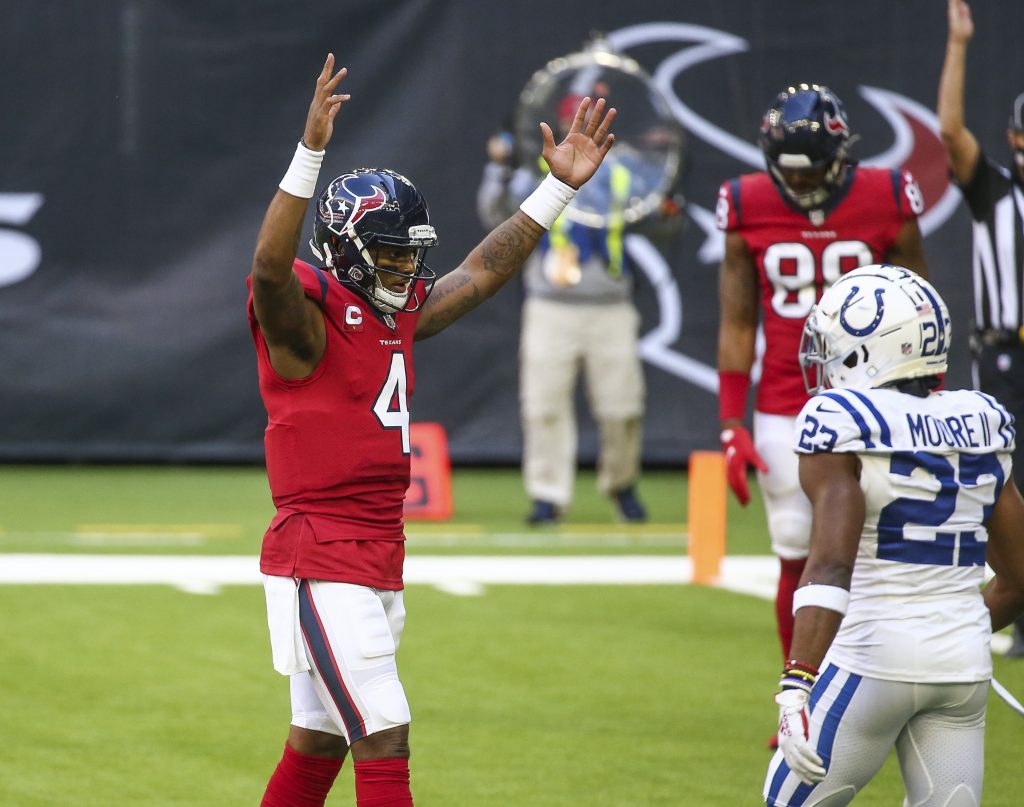 NFL football is officially back this week. The Hall of Fame Game will kickoff the preseason in just a couple of days on August 5th. We’ll of course be bringing you free picks for the side and total on every single game, and you can read our Cowboys vs. Steelers Hall of Fame Game picks here, but we’ve still got a ways to go before the regular season starts.

As such, there are still a bunch of looming unanswered questions. Questions that could have significant impacts on the betting market. Before the season starts let’s break down the five biggest stories in the league right now, and how they’ll affect your wagering.

Pretty much all offseason, the Watson saga has been on the front-burner. Things are at a bit of a standstill right now, and the Texans and Watson are both in limbo. He’s reported to training camp, but isn’t practicing with the team. The sexual harassment claims against him are still very much unresolved, leaving us with several possible outcomes. It’s possible Watson is placed on the commissioner’s exempt list and league discipline keeps him from making an impact in 2021. It’s also possible that he’s cleared by the league and then traded, or even conceivable he could reconcile with the Texans (although that seems unlikely at this point).

As of right now, expectations for the Texans are low. Their win total is only 4.0, and they’ve got the highest odds of any team to win the Super Bowl. Houston is also around 30/1 to win the AFC South. If Watson is traded, the futures markets for whatever team he’s dealt to would change drastically. The Eagles have long been rumored as a potential trade partner, and you can get them at 100/1 to win the Super Bowl right now. If there’s a team you think is going to land Watson, sprinkling a little on them now could pay huge dividends if you turn out to be right.

Find out our picks for who wins the AFC this season, including a +1700 longshot!

The Rodgers saga on the other hand has reached a bit of a conclusion, for now. In exchange for some concessions from the team, he’s agreed to play the 2021 season with the Packers. But this drama isn’t going away anytime soon. It’ll be very interesting to see how this tension affects the team’s on-field play. Following this story closely and getting a good sense of the environment in Green Bay may help you find some value on Packers games this year.

With Rodgers seemingly pacified, the Packers have a win total of 10, with the over juiced at -140. They’ve got the fourth-lowest odds of any team to win the Super Bowl. If you think this story is going to cause too much of a distraction or generally hamper the team, you might want to back the under on Green Bay’s win total or perhaps bet a team like the Vikings to win the NFC North at +250. 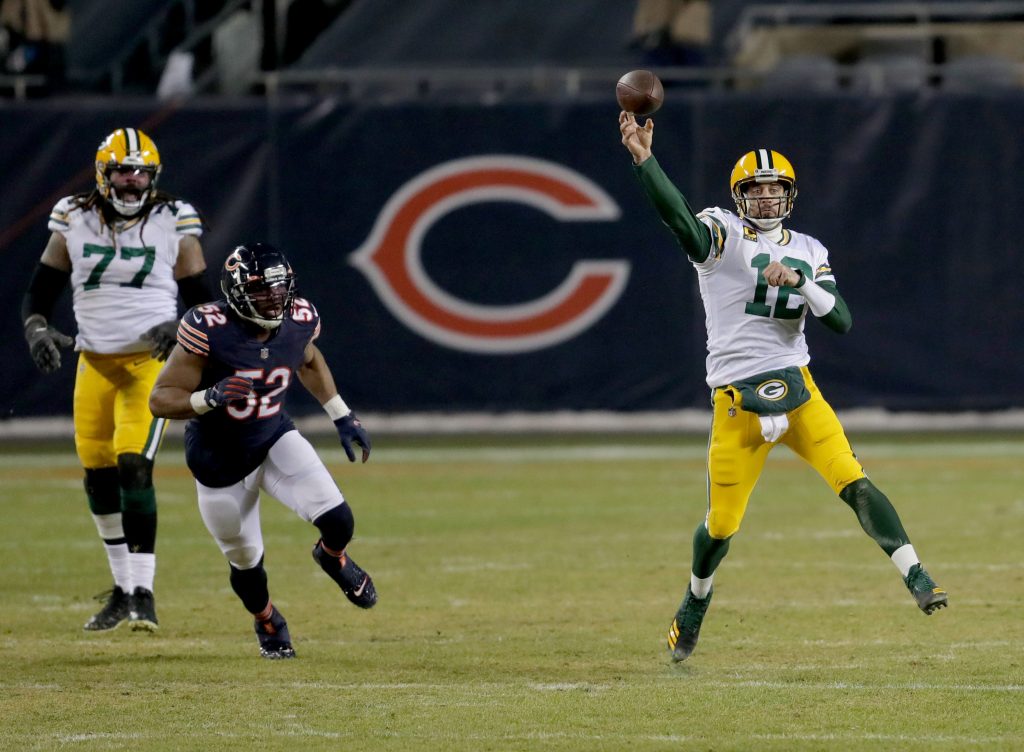 Unfortunately, Wentz just can’t stay healthy. The injury bug got him yet again this past week, when it was announced he’d have to undergo foot surgery. Word is that he’ll have to miss 5-12 weeks, which means he could be ready by Week 1 or miss half of the season. That’s a pretty wide range of outcomes, so being plugged in on this story and his status will be crucial.

If from following the reporting you get the sense that Wentz is going to be out longer than the team is hoping, there are a lot of bets you can make. Fortunately, oddsmakers have left Colts futures up for us to pore over. Their win total is set at 9.0 currently at DraftKings, with the under juiced to -125. Behind Wentz right now, Indy only has 2020 fourth-rounder Jacob Eason, Brett Hundley, and sixth-round rookie Sam Ehlinger. If you think Wentz is going to be out a while, fading the Colts could make a lot of sense.

Let’s lump a few together here. The 49ers, Bears, and Patriots all have huge calls to make. When will we see Trey Lance, Justin Fields, and Mac Jones? The answers to those questions will determine a lot. Lance has reportedly impressed in training camp, and on Tuesday he took his first reps with the first-team not too long after Kyle Shanahan said he wouldn’t be taking any first-team reps. The 49ers are 14/1 to win the Super Bowl, and are pretty much tied with the Rams to win the NFC West at +180.

Chicago is +550 to win the NFC North, and their win total is 7.5. If it was announced that Fields was going to start right away, their odds would likely improve. Andy Dalton will enter the season as the starter, but for how long? New England has a win total of 9.5, and they’re +350 to win the AFC East. Would they be better off with Jones or Cam Newton under center? When making bets on any of these three teams, there’s a lot you’re going to need to game out first.

5. Uncertainty with the Saints

Speaking of uncertainty, there’s a lot of it with the Saints. New Orleans has been viewed as a legit Super Bowl contender entering each of the past few seasons, but now they’re without Drew Brees. We also still don’t know who is going to start at quarterback. Jameis Winston or Taysom Hill? It’s still anyone’s guess at this point. Michael Thomas is also dealing with a mysterious ankle injury that will knock him out for an unspecified amount of time.

Obviously, we should never doubt Sean Payton, but are oddsmakers being too deferential to the legendary offensive mind? If you’re a big believer in Famous Jameis and think the Bucs are in for a Super Bowl hangover, the Saints at +350 to win the NFC South could be appealing. But if you think their lines are being set a bit high just because of respect for the franchise’s culture and that the turnover will prove to be too much, the under 9 on their win total might not look too bad for a team with a lot of question marks.

Make sure you check out our best NFL futures bets for the upcoming season!

Pickswise is the home of free expert NFL Picks and NFL Odds. Be sure to check out all of our season previews and NFL Futures Bets leading up to the 2022 NFL season.

The post The 5 biggest stories entering the 2021 NFL season, and how they shape the betting market appeared first on Pickswise.